September 5, 2019 by Mathis in International 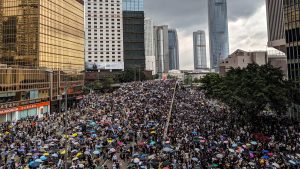 Hong Kong’s Chief Executive Officer, Carrie Lam, announced on Wednesday, September 4, that the controversial bill on the extradition of suspects to China would be withdrawn. This text is at the root of the most serious political crisis in the Special Administrative Region since the handover of the former British colony to China in 1997. This reversal fulfils one of the five demands made by the demonstrators over the past three months.

Carrie Lam made the announcement following a meeting with Hong Kong parliamentarians in favour of Beijing and delegates from the Chinese National People’s Congress (NPC). “I hope this announcement will help the company move forward,” said the leader imposed by Beijing in 2017. “We must find ways to respond to discontent,” she added, deploring the fact that the violence of recent months has “shaken the foundations” of Hong Kong society and placed the former British colony “in a situation of vulnerability and danger.

The so-called “establishment” camp had been furious to learn “after everyone else” of the decision to suspend the bill, announced at a press conference on June 15. Concerned not to repeat this mistake, Carrie Lam seems to have taken care of her allies this time.

The formal withdrawal of the bill, which will take place in October when the Legco (Parliament) meets again, is the decision that millions of Hong Kongers have been calling for since the beginning of June. Had it been adopted, the law would have allowed the extradition of persons on Hong Kong soil, of all nationalities, including to China; this would have effectively killed Hong Kong’s independence of the judiciary and the principle of “one country, two systems” that has governed the Special Administrative Region since its handover to China.

The Hong Kong Stock Exchange’s Hang Seng Index jumped 3.9% on Wednesday following initial reports that the bill was likely to be withdrawn. The economy had been showing signs of weakening in recent weeks, and business discontent was also beginning to be heard.

However, this decision may be described as “too little, too late”. Everything indicates that if this measure had been taken following the first major demonstration of opposition to the bill on 9 June, the blackest summer of destruction and violence in Hong Kong since the 1967 riots – linked to the Cultural Revolution – would have been avoided.

Three days later, Carrie Lam confirmed the second reading of the text, which led to the first scenes of confrontations between police forces and demonstrators. The simple “suspension” announced on June 15, when opponents of the bill called for its total “abandonment”, provoked an even more massive demonstration, with, according to the organizers, 2 million people on the streets (out of a population of 7.3 million inhabitants).

While it appeared during the crisis that this bill was an initiative of Carrie Lam, it had nevertheless received the support of Beijing, which was not asking for so much, but which had every reason to welcome this legislative tool to increase its control over Hong Kong. Since then, Beijing has distanced itself from the project, but has constantly reaffirmed its support for Carrie Lam and the local police. On 7 August, the head of the Chinese government agency responsible for Hong Kong formally ruled out any formal withdrawal at a meeting in Shenzhen.

This announcement also comes two days after Carrie Lam’s private conversation with businessmen leaked, in which she said that once a file is categorized as “national”, the Chief Executive’s room for manoeuvre is “very, very, very limited”. She also claims to be “responsible” for this “totally unforgivable” chaos and says that “if she could”, she would have resigned.

Since the June 12 overflows, Hong Kongers’ anger has increased. The police, to whom crisis management has been delegated by the government and who have, on many occasions, appeared to be committing abuses, have crystallized the anger of the young demonstrators who have used increasingly violent methods. “Carrie Lam must now engage in dialogue, show that she is truly committed to resolving this crisis,” said Emily Lau, former MP and heavyweight of the pro-democracy camp.

The other four demands of the movement are:

As for the initial demand for Carrie Lam’s resignation, the demonstrators seem to be less and less keen on it, considering that one puppet chosen by Beijing is worth another.