No, Santa Claus has not always been red. A mythical character, modern and ancient at the same time, he condenses multiple traditions, from ritual sacrifices to bawdy parties, including morals, tales and excessive commercialization. Here is the story of this funny man.

The year is coming to an end. At the time of rest, of the possibility of starting all over again thanks to the approaching new year, the longest nights open a breach in time upsetting our daily lives. There the marvelous invites itself and sneaks in Santa Claus, recalling ancient rites linked to the home, to the tree, to childhood…

Antique and modern at the same time, Santa Claus accomplishes the tour de force of bringing together pagan kings and Christian saints, while being secular. Several characters thus move towards this old man that globalization seems to have frozen for eternity.

For the anthropologist Claude Lévi-Strauss, Christmas inherits the festivals of Antiquity and the Middle Ages, where an “ephemeral king” was put to death, really or symbolically: the king of the Saturnalia, the abbot of Liesse, the abbot of the Sots, during the Feast of the Innocents or the Fools, a bawdy festival organized at the end of the year. It is the libertas decembris : all is allowed during the tenebrous December, subversive and licentious.

Christmas would be the re-actualization of these primordial rites of sacrifice and overthrow of the social order, and Santa Claus the last avatar of these ephemeral kings, no longer sacrificed, but on the contrary revitalized, even divinized. 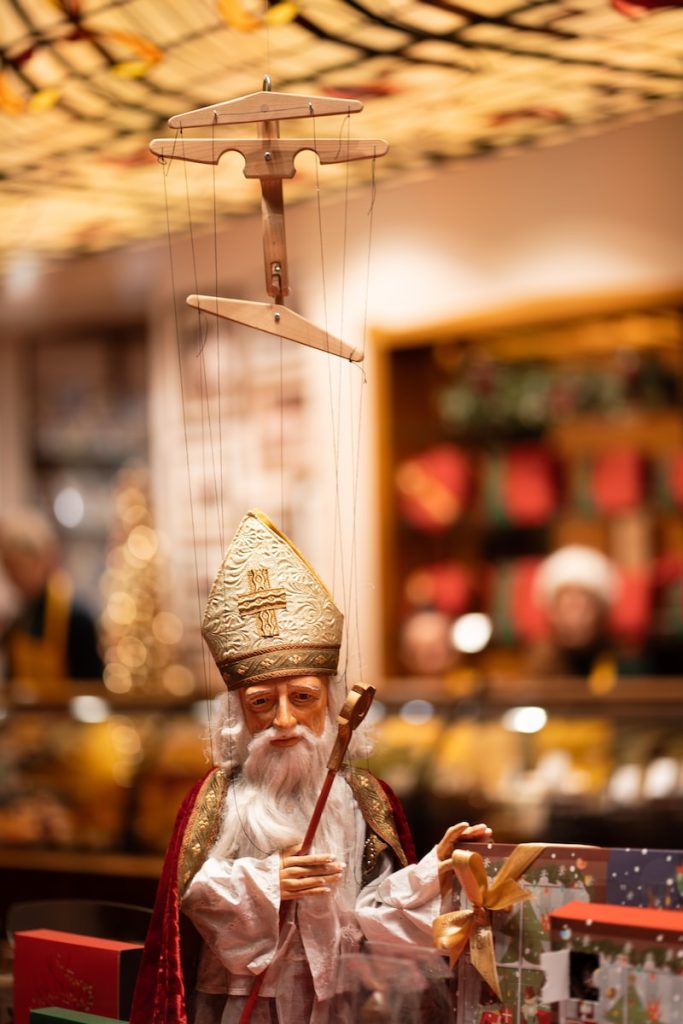 From Saint Nicholas to Julenisse

His most easily identifiable ancestor is however Nicholas of Myre (c. 270-c. 345). According to the legend, this bishop of Asia Minor would have helped a great number of unfortunate people, in particular the poor and children, to whom he distributed his goods at night. It is said that he brought back to life three little boys who had been butchered and put in the salt cellar.

Since the Middle Ages, she has been worshipped by the people, especially in Germany and eastern France. His relics would allow parents to find their lost children. He became the protector of children and also the one who distributes gifts to them. From the 16th century, on the night of his feast day, from December 5 to 6, it is said that he visits them in his bishop’s costume, wearing a mitre, with a crosier in his hand and often accompanied by a mule. To the wise men, he offers gifts; to the naughty ones, the bogeyman, who accompanies him, gives blows with a stick.

In Protestant countries, hostile to the cult of saints, this festival was suppressed to make way for the figure of Christkindel, a young girl dressed and veiled in white, her head girded with a crown of fir branches decorated with candles, who represented the Christ Child and distributed gifts on December 25.

However, Saint Nicholas remained alive in Holland and was reconstituted in New Amsterdam, future New York, at the beginning of the 17th century: it was the feast of Sinterklaas, which will become Santa Claus, with the arrival of the English troops, in 1664.

In France, Saint Nicholas is gradually confused with the Christmas man and cohabits with regional figures dispensing gifts: Aunt Arie in Franche-Comté, Befana in Italy, Olentzero in the Basque Country, Father Janvier in Burgundy or Father Chalande in Savoy.

In Scandinavian countries, an old and bearded goblin (nisse in Norway or tomte in Sweden), dressed as a peasant, protected the children and the house during the night. From the 19th century, the Julenisse or Jultomte is in charge of bringing presents to children during Yule (or Jul), the ancient celebration of the winter solstice. Gradually, Santa Claus will supplant all these figures. 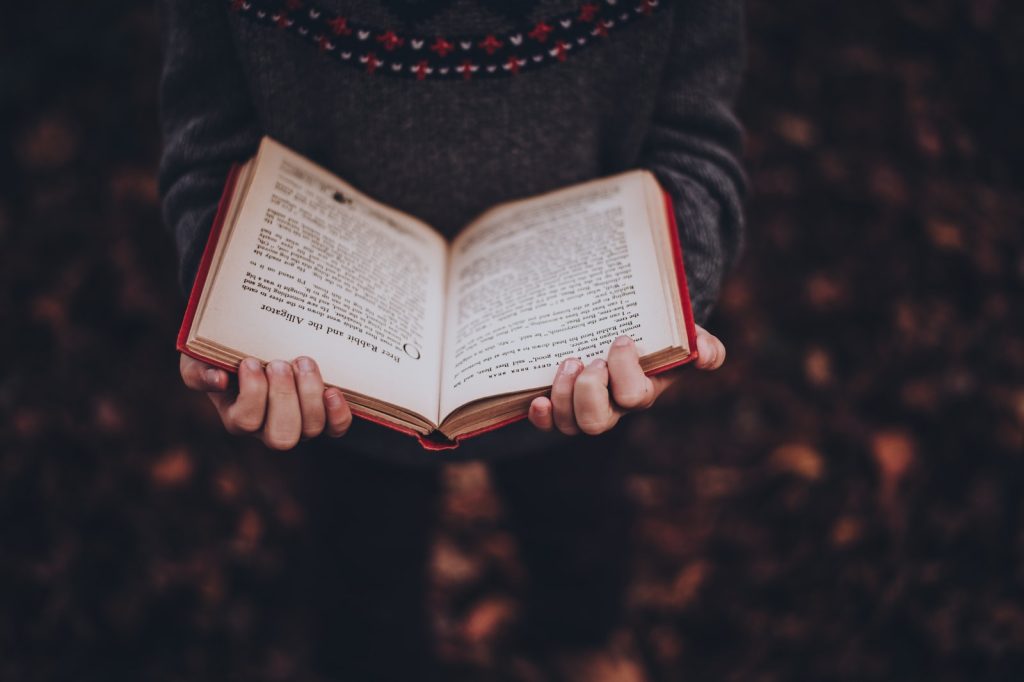 There is no Santa Claus without Christmas tales: it is thanks to literature that he becomes a character in his own right. The texts set out his story, but leave it open to variations: it is up to each person’s imagination to choose, to complete and to renew it.

In 1809, the American writer Washington Irving publishes Knickerbocker’s History, whose success starts the transition between Saint Nicholas and Santa Claus: in the XVIIth century, a Dutch sailor who had embarked for America is shipwrecked. The saint then appears to him in a dream, pulling on a pipe whose cloud indicates the location of the future city where he wishes to see the Dutch immigrants settle: Mana-hatta (Manhattan); in exchange, he promises to come every year on his flying chariot to offer presents to the children, passing by the chimneys.

Another text was extraordinarily popular: A Visit From St. Nicholas, a story in anonymous verse most often attributed to Clement Clarke Moore, published in 1823 in the New York newspaper The Sentinel. In it, the future Santa Claus appears in secular clothing and carries a bag of toys on his back. He passes through the chimneys and moves through the sky with a small sleigh and small reindeer, Tornado, Dancer, Fury, Dashing, Comet, Cupid, Thunder and Lightning:

“His eyes, how they shone! Her cheekbones were happy, Her cheeks were blooming and her nose was like a cherry! His funny little mouth stretched like a bow, The beard on his chin, as white as snow. He held a pipe tight between his lips, A circle of smoke haloed his forehead; He had a large head and a small round belly.”

In the magazines and almanacs of the 1840s, American artists offered more and more illustrations of this man wearing a stuffed hat or a bonnet instead of a mitre, flanked by his reindeer and his hood on his back. He often wears the famous knickers and smokes a Dutch pipe.

Read  Apple supplying phones for hackers to find bugs in their smartphones? 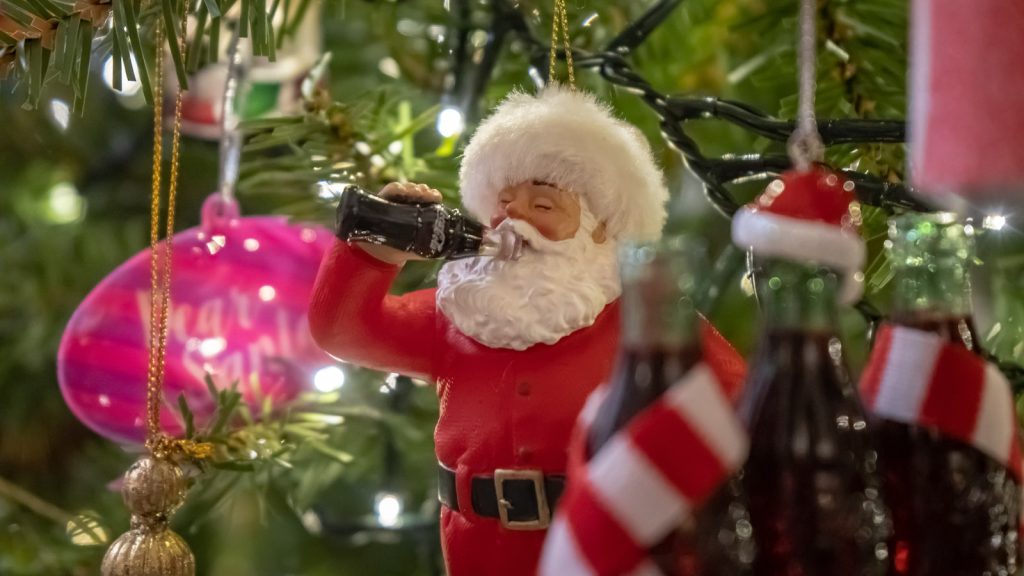 The Nordic Santa Claus is slowly making his mark. In 1881, the Swedish Viktor Rydberg published a poem entitled Tomte, which links the elves of Scandinavian folklore to Santa Claus, presented as an old bearded man in a long red fur coat.

The convergence of the different figures leading to the Santa Claus we know today accelerates after the First World War. In France, Santa Claus, imported by the American soldiers, in pants, jacket and red hat, coexists with Saint Nicolas, always in episcopal habit. The “good man” or “daddy” Christmas in houppelande ends up integrating their characteristics.

After the Second World War, the celebration of Christmas took on considerable importance, particularly through loans to the United States. Santa’s gift-giving on December 25 slowly took hold and began to have a passionate relationship with commercial brands. From the end of the 19th century, the Christmas man was used in advertisements: soaps, cars, pens and the famous Coca-Cola.

In the 1931 advert, the pink and chubby old man, in a short jacket and cap, is dressed in the colors of the bottle from which he drinks to regain his strength during his rounds. It is diffused everywhere during decades: it is the consecration of this character, tutelary god of the publicity and the stores, to which we pay homage on December 25. Is it the golden calf of modern times? The traditional Christmas celebration of the Old Continent is recovered by commercial strategies that make Christmas shopping sacrifices and stores the places of the greatest supplications.

Gifts are now a right recognized to children and legitimately demanded: in short, a duty for parents, which is accompanied by an important moral dimension. How, in fact, can one compete with Santa Claus who is so benevolent and generous? He takes the word of children who say they have been good and no longer even believes in the bogeyman. The secular evolution of Christmas does not let it recreate another sacredness.

In the magazine Les Temps modernes, in 1952, Claude Lévi-Strauss goes so far as to consider Santa Claus as a deity who receives a cult from children (letters, prayers, promises), as well as offerings: something to quench his thirst and, for his reindeer, carrots. To believe or not to believe anymore?

The passage from one to the other is a real initiation ritual: the little ones are, in a way, excluded from the society of “those who know”, and the revelation of illusions can be difficult to live with. It is often the result of other children or of doubts that adults are asked to confirm, but not always. Because many toddlers continue to play the game, as if they recognized in the efforts of the parents to maintain the fiction, a real need… for them!

Indeed, the child, explains the anthropologist, has an archaic and symbolic function of passer-by, when, at the end of the year, darkness gradually replaces the light. In the archaic imagination, the dead mingle with the living: thus, in Scandinavia and in the Slavic world, New Year’s Eve is a meal offered to the dead, and, in certain cultures, the children who died before baptism become elves.

The gifts are then a way to maintain them in a vitality damaged since the fall (the Halloween party is the dramatic moment). Traditionally, this is a time when the little ones go on a quest and threaten to play tricks. Santa Claus makes it possible to anticipate these symbolic demands for ransom so as not to expose the living to a curse.

Thus, children are encouraged to believe in Santa Claus, who keeps order by disciplining children’s demands and erasing any deadly dimension. Thanks to Santa Claus, parents put themselves at the service of children to better welcome them among those who no longer believe, while recognizing the need to believe and to reunite on the side of life. Santa Claus thus represents a patriarchal figure around whom families gather.

Could he finally be a god of the home? The religious holiday of December 25th has been transformed into a celebration of the family. Each family celebrates Christmas with its own conventions regarding the decoration of the tree, the meal, the songs, the protocol for giving presents, while at the same time following the customs of its time and country. The Christmas celebration, even the most secular, is sacralized by these rituals.

This appreciation of the home arouses a strong empathy towards those who do not have one and invites to share. Is it the memory of the helpful Saint Nicholas? Christian charity and secular solidarity towards the needy coexist: for a long time the Salvation Army has been organizing Christmas collections; the Restos du cœur are particularly active at the end of the year, and operations “A Christmas for all” are organized for the poor and the isolated.

Christmas night can be a great ordeal of loneliness, as testified by the SOS Amitié association, which receives many more distress calls during this period than during the rest of the year. Christmas is a way to reduce for a moment the distance between “those who have” and “those who have not”. Generosity is symbolized by the presence of a unique and mysterious being, Santa Claus. Everyone can, for a moment, embody it.