The situation could get a little more tense. Several attacks against oil tankers are reported to have taken place in the Gulf of Oman. Distress calls have been reported. One of them was reportedly from a Norwegian company Frontline ship: it was hit by a torpedo in the United Arab Emirates off Fujairah, United Arab Emirates, according to the Tradewinds newspaper, which relies on industrial sources.

Maritime and commercial sources have also indicated, without further clarification, that two tankers were evacuated after an incident in the Arabian Sea. Forty-four crew members of two damaged oil tankers were rescued in the Arabian Sea by Iranian sailors and landed in ports in the Islamic Republic, reports the official news agency Irna. “Forty-four sailors were rescued from the waters by a [Iranian] Navy rescue unit in Hormozgan province[southern Iran, editor’s note] and transferred to the port of Bandar-é Jask,” writes Irna, who cites “an informed source. 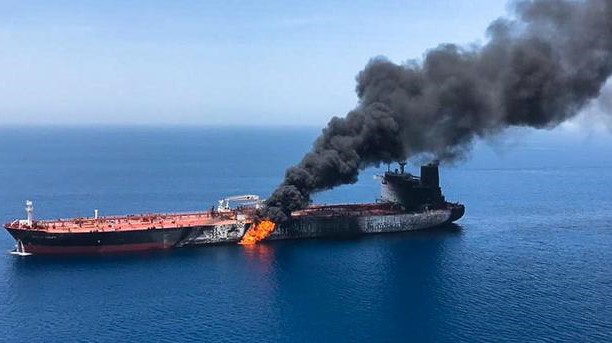 The vessels in question would be the Altair Front and the Kokuka Courageous, which are under the flags of the Marshall Islands and Panama respectively. Three explosions were reported aboard the tanker Front Altair, owned by the Norwegian group Frontline, announced the Norwegian maritime authorities, stating that no crew members had been injured. The 111,000-ton Altair Front, a tanker, is currently on fire and relief supplies are on site, according to the same source. “Today, June 13 at 6:03 a.m., the Front Altair, a Marshall flag ship, was attacked between the Emirates and Iran,” the statement said. “Three explosions on the ship have been reported. The crew boarded a passing ship that would not be injured,” she said. The tanker did not sink, the director general of Frontline, the owner of the ship, told Agence France-Presse, denying information of Iranian origin. “I can confirm that the ship has NOT sunk,” Robert Hvide Macleod wrote in an SMS to Agence France-Presse. The 23 people on board are “all safe,” he said.

The second ship, the Kokuka Courageous, a LNG carrier was fired upon, but the entire crew was saved after the ship was abandoned, and its methanol cargo is intact, said its Japanese operator Kokuka Sangyo. “It seems that other ships have also been shot at,” company president Yutaka Katada told reporters in Tokyo, confirming information from his Singapore parent company about a “security incident. These incidents occurred at one hour intervals 25 nautical miles and 28 nautical miles from Bandar-é Jask, the official agency added, while Iranian television broadcast images of a fire aboard one of the two ships.

The 5th American fleet, based in Bahrain, reported on Thursday that it received two “distress calls” early in the morning from tankers in the Arabian Sea who were reportedly the target of an “attack”. “U.S. naval forces in the region received two separate distress calls, at 6:12 a.m. local time and a second at 7 a.m. local time,” she added. The statement states that “American ships are in the area and are providing assistance”. According to Irna, the first accident occurred at 8:50 am at 25 nautical miles from Bandar-é Jask aboard the Marshall Islands flag ship carrying a cargo of ethanol loaded in Qatar and bound for Taiwan. “An hour later, at 9:50 am, the second ship caught fire 28 nautical miles from Bandar-é Jask,” the agency added. Irna reports press reports that this vessel was carrying methanol loaded in a Saudi port to Singapore.

This incident comes one month after mysterious alleged “acts of sabotage” targeting four commercial vessels, including a Norwegian oil tanker. Saudi Arabia had attributed them to Iran. Norwegian maritime authorities have called on Norwegian ships to exercise “high vigilance and caution” in the region. “Even if the background to these attacks is not entirely clear, the Directorate of Maritime Affairs advises, after today’s episode, to remain well away from Iranian waters until further notice,” the statement said. In addition, this new incident, the second in a month involving navigation in this strategic maritime passage, comes at a time of heightened tensions between Tehran and Washington, which accused Iran of being behind the first incident in May.

Iran reacted this Thursday, indicating “its concern” after “suspicious incidents”, reports Agence France-Presse. The Iranian Foreign Minister considered it highly suspicious that these “attacks” coincided with the visit to Tehran of Japanese Prime Minister Shinzo Abe. “The word “suspicious” is not enough to describe what seems to be transpiring” from these “attacks” on “tankers linked to Japan that occurred while the[Japanese] Prime Minister was meeting” the Iranian Supreme Leader in Tehran, writes Mohammad Javad Zarif on Twitter.

Raw materials: the key factors of success for Panoro Energy