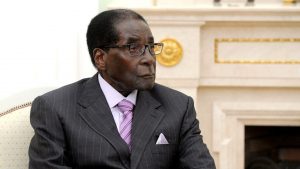 The ex-dictator was 95 years old. During his 37-year reign, he went from being a hero of independence to being a tyrant who caused his country’s economic collapse.

Former Zimbabwean President Robert Mugabe, who ruled his country with an iron fist from 1980 to 2017, died at the age of 95, Head of State Emmerson Mnangagwa announced on Friday.

“It is with the utmost sadness that I announce the passing on of Zimbabwe’s founding father and former President, Cde Robert Mugabe” current President Emmerson Mnangagwa said in a tweet.

During his 37-year reign as head of Zimbabwe until his fall in 2017, Robert Mugabe, who died at the age of 95, went from being a hero of independence and a friend of the West to being a tyrant who caused his country’s economic collapse.

Heavy hand against his opponents

He survived less than two years after his humiliating resignation in November 2017, under pressure from the army.

“He was a formidable leader whose power degenerated to the point of bringing Zimbabwe to its knees,” says Shadrack Gutto, a professor at the Unisa University of South Africa”

When he took over the reins of the former Rhodesia, which became independent in 1980, Robert Mugabe seduced. His policy of reconciliation, in the name of the unity of the country, has earned him general praise, particularly in foreign capitals. “You were my enemies yesterday, you are now my friends,” says the former guerrilla leader.

He offered key ministerial positions to whites and even allowed their leader, Ian Smith, to stay in the country. With diplomas, the revolutionary Mugabe appears to be a model leader. In ten years, the country has made giant strides in building schools, health centres and new housing for the black majority.

Very early on, however, the hero had a heavy hand against his opponents.

In 1982, he sent the army to the “dissident” province of Matabeleland (southwest), the land of the Ndebele and its former wartime ally, Joshua Nkomo. The brutal repression caused about 20,000 deaths. But the world closes its eyes. It was not until the 2000s, with its abuses against the opposition, electoral fraud and, above all, its violent agrarian reform, that the idyll ended.

Politically weakened, destabilized by his comrades in arms during the war of independence, Robert Mugabe decided to give them grain to grind by dropping them against the white farmers, who still held most of the country’s land.

Hundreds of thousands of blacks become homeowners, but at the cost of violence that forces most of the 4,500 white farmers to leave the country and makes the headlines in the Western media. The reform precipitates the collapse of an already struggling economy. There is a lack of liquidity and 90% of Zimbabweans are unemployed.

The little man with a thin moustache and thick glasses, who embodied the success of an independent Africa, then definitively joined the ranks of pariahs on the international scene, which he would gladly accept.

In anti-imperialist vitriol diatribes, Robert Mugabe blames the West for all the ills of his country, including its financial ruin, and rejects all accusations of authoritarian drift.