The final of the European soccer competition on Saturday in Saint-Denis was marred by numerous incidents. Hundreds of Liverpool fans were rounded up, blocked at the entrance to the stadium and then gassed by the police. A failure of the French public authorities that punctuates long years of repressive and inappropriate policing, often violent. 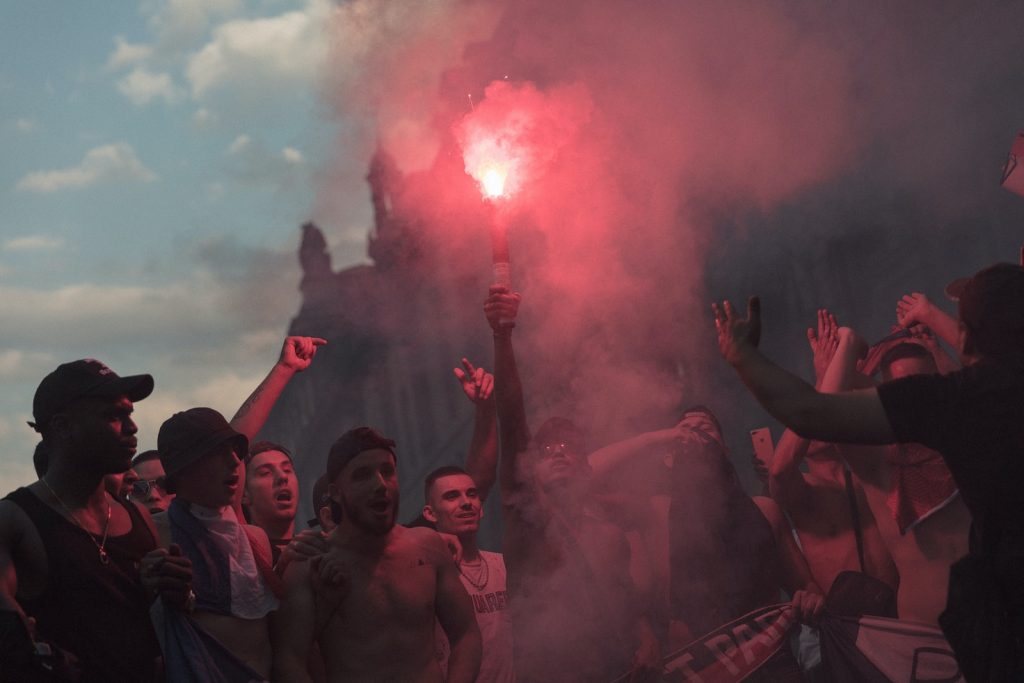 French know-how is being exported. For a long time reserved for the suburbs of big cities, then transposed to “yellow vests” gatherings and then to demonstrations of all kinds, the failure of French-style policing was seen on Saturday night by more than 300 million people around the world.

In Saint-Denis (Seine-Saint-Denis), where the final of the Champions League was held, and in Paris, where thousands of fans had gathered to watch the match on a giant screen, journalists filmed images of crowds charged by the forces of order, sprayed with tear gas or squeezed into tight spaces. Around the Stade de France, the disorganization was such that the match was delayed – a rare occurrence – by more than thirty minutes.
A policeman loads a fan, Saturday, May 28, at the Stade de France in Saint-Denis (Seine-Saint-Denis). Photo Maryam El Hamouchi / AFP

On Saturday evening, the sequence of events was not yet completely clear but what we know is enough to make us sigh with dismay. The pre-filtering device set up by the police prefecture quickly gave way; thousands of people were massed against the gates of the Stade de France, with or without a ticket to attend the match; the entrance to the stadium took several hours to some supporters; some people entered the enclosure by climbing its gates; overwhelmed, the police sprayed tear gas on the crowds, which were nevertheless calm and mixed with men, women and children.

Paul Machin, the embodiment of a web TV dedicated to the Reds, wrote on Twitter: “I’ve followed Liverpool all over the world. I’ve been to five finals in Europe. I’ve never seen such incompetence in the organization. But the worst thing will remain the horrible brutality of the French police. Tear gas. Guns pointed at fans.” Ian Byrne, a Labour MP from Liverpool, said he had “one of the worst experiences of [his] life,” lamenting a “horrific” organization putting “lives at risk.”

The Liverpool club said in a statement that it was “hugely disappointed” with the treatment of its supporters. “The fans should not have to live the scenes we witnessed tonight,” said the English club, which challenged Real Madrid. We have officially requested an investigation to understand the causes of these unacceptable situations.”

The boomerang of the French “all repressive” in the stadiums

While waiting for the results of a much-needed investigation, there is nothing enigmatic about the structural causes of the Dionysian fiasco. It is enough to understand that access to the Stade de France was managed in concert by the Paris police prefecture and the French Football Federation (FFF), a sort of subcontractor to UEFA, its big European sister. A double administrative and sporting supervision that soccer fans in France know well: it is the one that, for more than a decade, has applied a doctrine of “all repression” that shines by its failure.

Faced with violence in and around soccer stadiums, the public authorities have taken the side of an all-out repression, which was denounced in a report co-authored in May 2020 by the Communist deputy Marie-George Buffet and her colleague Sacha Houlié (La République en marche).

In addition to stadium bans (the famous IDS), generalized data filing, the ban on the use of smoke, and collective sanctions, a weapon prized by the prefects of France has been added: the travel ban. In the absence of a targeted solution, the authorities have gotten into the habit of circumventing the problem of fan management by banning everyone, everywhere – even if it means trampling on certain fundamental freedoms.

It is this boomerang that came back to the face of the French authorities on Saturday. For lack of having built a doctrine and a know-how in this matter, France was caught in the trap of its own blindness.

Nothing of what happened on Saturday was unpredictable.

The number of ticketed fans? It was obviously known, and was usually linked to the capacity of the Stade de France. The number of people without tickets? Everything indicated that it would be important: the intelligence services had estimated, for example, the number of Liverpool fans who would go to Paris without the entrance ticket at 50,000. The risk that some people would try to enter the stadium without a ticket? It was also known, a year after a Euro final where this happened, at Wembley Stadium in London.

Despite all this, on a site in Saint-Denis that has hosted events of this type for 25 years, in front of an ostensibly disciplined crowd, the French organization shone by its failure. To this, the authorities added the disgrace of indecent communication – another local specialty.

As usual, Interior Minister Gérald Darmanin took to Twitter to try to rewrite the story unfolding before his eyes. “Thousands of British ‘fans’, without tickets for with fake tickets forced the entrances and, sometimes, violated the stadia,” wrote the minister, going against all the testimonies and findings of journalists, French and foreign, present on site.

An old habit of Place Beauvau: on May 1, 2019, already, his predecessor Christophe Castaner had published a tweet remained for posterity for its distance with the truth. That day, after a few dozen people had taken refuge at the foot of a Parisian hospital to escape the tear gas on the sidelines of a demonstration, the interior minister had launched: “Here, at the Pitié-Salpétrière, we attacked a hospital.” A way, at the time, to justify the violent charge of his agents.

Three years later, the villains are no longer the yellow vests but the English fans. Even more convenient: they do not vote in France. By surfing on the worn-out rhetoric of the violent supporter, Gérald Darmanin flatters the baser instincts and exonerates himself from any responsibility (the extreme right pointed to “the scum” of Saint-Denis). In a statement, the police prefecture praised a few minutes later “the rapid intervention of the forces of order” and the “return to calm” that it would have allowed.

At work for two years, the duo formed by Gérald Darmanin and Didier Lallement, the police prefect of Paris, continues to combine failures and self-congratulations with an almost bluffing aplomb. In their “move along, there’s nothing to see” logic, the forces of order even tried to ensure that no, there would be nothing to see of their failure.

Rob Harris, a reporter for the Associated Press, reported that members of UEFA, the European soccer body, had to intervene after media were prevented from filming crowds being dispersed with tear gas. His colleague, Steve Douglas, recounted a cautionary tale of being pulled aside, stripped of his accreditation and threatened not to get it back until he removed the crowd footage he had shot.

In the French and international press, Real Madrid’s fourteenth European title was rivaled, if not eclipsed, by the shameful images of the surroundings: families being sprayed with tear gas, fans being deprived of part of the match even though they had paid several hundred (or even thousands) of euros to attend, people climbing over gates to get into the stadium, journalists being prevented from filming… What would have been said if these scenes had taken place in Russia, Cameroon or Brazil?

The BBC, on its website, talks about the “chaos of Paris” and a “sad night for Liverpool and its fans, at all levels”, linking the extra-sporting incidents to the Reds’ 1-0 loss to Real Madrid. The Telegraph also has a digital front page about the incidents, with a clear headline: “Liverpool fans gassed by Paris police”. In their article, the Telegraph contrasts “the calmness of the crowd” with “the growing concern of police officers, fearing they are losing control and causing more pressure on those present”.
TNT Sports, a Brazilian media outlet, filmed the entry of some Liverpool fans into the stadium © Twitter

We can only rejoice, this Sunday, to have avoided a drama. A potentially fatal crowd movement, for example; the history of Liverpool has kept a bruising trace, inherited from another European final in 1985. How can we not think of the worst, when some people were able to attend the match while evading controls, at the very place where the terrorist attacks of November 2015 began?

Fortunately, the worst did not happen but the disgrace is there. Emmanuel Macron, who was personally involved in recovering the organization of an event initially planned in Russia, is now facing a political problem. The position of Didier Lallement, the police prefect in charge of such a nightmarish event, should be made untenable, but the head of state has maintained his confidence in him for the past three years, against all odds, so that it seems utopian to see him change his mind.

Beyond the individuals, it is a whole logic of maintaining order, of relations with the population and with journalists that the State must rethink. In two years, the country must welcome the Olympic and Paralympic Games, whose opening ceremony is supposed to take place on and along the banks of the Seine.

Brazil: Lula and Bolsonaro on the ballot on Oct. 30