Sydney wrapped in toxic fog after the fires 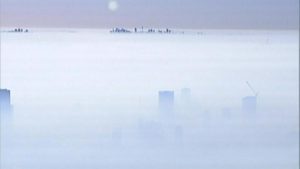 Sydney was wrapped on Tuesday in a thick toxic fog, fuelled by the fires that have been devastating the east coast of Australia since last Friday.

Pollution levels have reached “dangerous” levels in Sydney according to official figures, with the highest concentrations of fine particulate matter PM 2.5 reaching up to 186 parts per million in the northwest of the city, rates comparable to those observed in the Indian capital New Delhi. Residents were instructed to avoid physical activities outside.

If the fog had started to clear in the middle of the day, it was expected to thicken again on Tuesday evening, weather services said.

“For most people, smoke causes mild symptoms such as irritated eyes, nose and throat,” he said. “However, people with asthma, emphysema and angina may be more sensitive to the effects of smoke.

The fog that surrounds Sydney, the capital of New South Wales (south-east), comes largely from a gigantic bush fire that ravages two national parks, some 100 kilometres north-west of the city.

The blaze has been raging for several days, and has already burned nearly 140,000 hectares of bush.

Six people have died and hundreds of homes have been destroyed by fires in New South Wales and Queensland since the beginning of the fire season in September.

Higher temperatures, at about 40 degrees Celsius, as well as strong winds and low humidity are expected, increasing the risk of fires on Wednesday.

More than 110 fires are still active. Hundreds of houses were damaged or destroyed, and more than one million hectares of vegetation were destroyed by fire.

Such fires occur annually on the huge island continent during the southern spring and summer. But this year’s fire season was particularly early and violent and could be one of the worst in the country.