Tourism companies in Australia are struggling to keep tourists diving into the Great Barrier Reef, The world’s largest coral reef despite warnings from scientists and environmentalists. 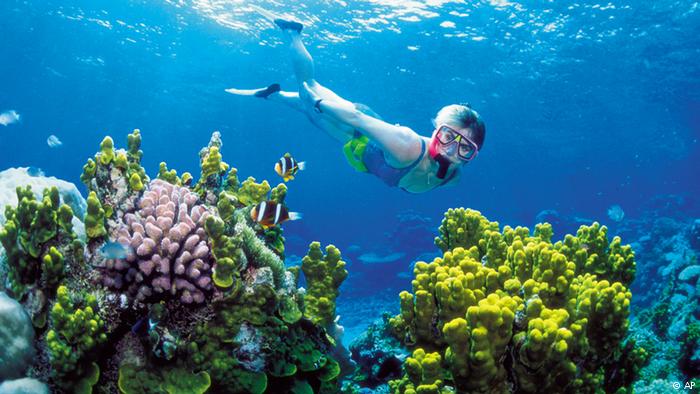 Each year, more than two million tourists wearing snorkel masks and ducklings head to the famous Australian reef, generating $ 4.3 billion in an industry that employs 64,000 people.

But rising ocean temperatures caused damage to the reef and bleaching phenomena that could cause a drop in the number of tourists.

The Reef Research Center has recently published a report that has caused surprise by announcing “significant signs of regeneration” in major dive sites around northern Cairns.

Although the report gave rise to enthusiastic media coverage, it deliberately contradicted the findings of other studies on the actual state of the Great Barrier.

According to Col McKenzie of a lobby group in the tourism industry, the intent of this report was to demonstrate that the reef did not become entirely an aquatic desert.

“Overall, we are seeing a decrease in the number of tourists due to the bad press, there is no doubt,” he told AFP.

For McKenzie, demonstrating that some areas of this immense ecosystem are still full of life and color is of vital importance.

Their remarks are the latest example of fighting between environmental groups and tourism industries struggling to defend their opposing interests and adapt to the new reality of the reef.

While some corals may recover from a bleaching episode in a matter of months, others more damaged may take up to a decade to return to normal, according to Terry Hughes of James Cook University, who monitors bleaching episodes.

Coral bleaching is due to reef-induced stress from certain factors, including increased ocean temperatures.

According to the Australian Institute of Marine Science, coral reef coverage on the Great Barrier Reef – an indicator of the overall health of a reef – has declined in the last four years due to the cumulative effect of multiple and severe disturbances.

In addition to the impact of the extreme temperatures of the ocean – more intense in certain areas – the Great Barrier is also affected by residues of agricultural activity, urban development and tropical cyclones, according to the institute.

Within the Australian government, different interests are faced.

For now, Canberra has been able to prevent Unesco from putting the coral reef on the list of humankind’s endangered heritage, as this would have serious consequences for the tourism industry.

Although the government has provided funds for the protection of this ecosystem, it supports at the same time the development, in a nearby area, of a gigantic mining project of the Indian group Adani.

According to an IPSOS annual survey, only 50% of the population believes that climate change has caused the destruction of the barrier. Scientists like Hughes remain determined to keep documenting the changes in the reef. “We are in a critical period of recovery,” he said.

“What we do not know is whether there will be another bleaching episode, which could occur with a next wave of heat” from next year, he added.